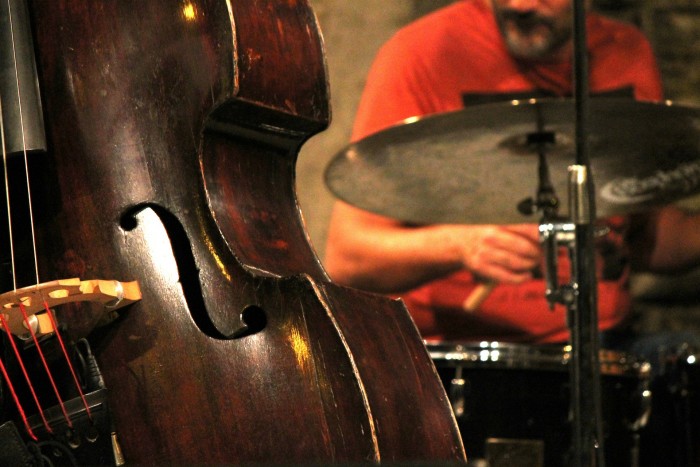 This post is the fourth in a series of five articles describing a major arts-based leadership development programme at Oxford University’s Saïd Business School, designed and run over a four-year period by Dr Mark Powell, one of the authors of this article.

The aim was to create a new culture of ‘open mindedness’ among the senior project managers of a UK oil and gas exploration company, encouraging them to interact more effectively with the other stakeholders in their capital projects and enhancing their ability to improvise in the face of rapidly changing situations.

The programme was designed to give delegates a series of ‘up close and personal’ encounters with performing artists. As Dr Powell says: ‘Having spent so many years running leadership programmes, I came to the conclusion that the things that really stick with people have two things in common. One is that they are experiential; the things that can actually change leaders’ behaviour tend to be real experiences, not some new piece of theory. The second thing I found is that leaders are more open to learning if they are presented with something from an unfamiliar context. People react defensively to new ideas in areas where they feel they are already pretty expert. But put them in front of jazz musicians or actors, and they accept that these people know stuff that they don’t know. They acknowledge that they may have something to learn from this encounter.’

And all that jazz

This article focusses on the jazz-based sessions of the programme. These were facilitated by Dr Powell, using a group of musicians assembled for the day by a professional jazz trumpeter. The fact that the band was assembled ‘from scratch’ with players who happened to be available on the day helped to reinforce the fact that experienced jazz musicians are able to perform to a remarkably high standard without rehearsal.

“Life is a lot like Jazz – it’s best when you improvise.” George Gershwin

Jazz is a rich field to explore in the context of organisational culture. There is only space in this article to cover some of the key ‘take-outs’ from a typical session.

The first reaction of many delegates was to question whether what they had just heard could possibly have been created mainly in the moment rather than rehearsed: the musicians’ improvisational skills are startling.

Delegates were intrigued by the way in which the musicians’ mastery allowed them great freedoms: their grasp of the underlying musical structures and their instrumental virtuosity gave them the ability to ‘feel’ what to play at any moment and, in effect, to innovate constantly.

Delegates considered and discussed the extent to which this was possible in the business world. ‘Mastery of one’s brief’ was seen as a possible equivalent with the consequent ability to make quick and successful decisions. In more technical fields, delegates talked about how real ‘masters’ were able to see or ‘feel’ possible solutions before they could articulate the whole process.

Moving leadership around the ensemble

Delegates were also intrigued by the ability of an apparently ‘leaderless’ ensemble to behave in such a complex and coordinated way. Discussion centred on how leadership was effectively passed around the ensemble, with each player being empowered to take the piece in a new direction, while the musicians’ intense focus on each other’s performance allowed them to respond instantly to the offered suggestions. These shifting leaders can be described as being temporarily ‘in charge, but not in control,’ a concept that was also developed in the drama sessions of this programme.

Subsuming individual performances to the whole

Delegates also noted how individual performances were subsumed to the overall performance. When a player took a solo, the rest of band dedicated their efforts to supporting them, picking up on new directions and offering their own rhythmic or tonal suggestions as inspiration. The soloists themselves were clearly working with the band to deliver a satisfying overall performance, rather than simply ‘showing off’.

The musicians demonstrated what happened when they focused only on their own performance and stopped supporting each other’s performance – the music quickly degenerated into blandness or cacophony.

This concept was similar to the one explored in the dance-related workshops in the programme, where dancers demonstrate what happens when the allowed leadership in a dance partnership degenerates into ‘push-pull’ – the dance immediately loses its grace.

Harnessing the energy of individual egos

It also tended to strike delegates that people in business teams are typically more focussed on their individual contribution than on the success of the overall ‘performance’ and that there is not the same focus on supporting and enabling colleagues’ performances, other than in a managerial sense. Current business culture tends to favour the individualist. On the ‘jazz’ model of organizational culture, individual egos may be large and even flamboyant, but they are let loose only when it is the individual’s turn to ‘star’ and are kept in check when it is their turn to support. The energy from these various controlled egos drives the performance, lifting it out of the ordinary.

In the authors’ experience, start-up companies very often have this kind of ‘jazz mentality’, with colleagues functioning as a genuine ensemble, driving each to deliver a greater overall performance. As companies grow, so industrial-era attitudes to control and efficiency tend to creep in, destroying the beautiful music.

Read the last article in this series – Embodied Leadership: Conducting Business – which explores the non-verbal communication used by orchestral and choral conductors.

A semi-fictionalised account of Dr Powell’s ground-breaking arts-based leadership programme is given in the business novel Perform To Win: Unlocking the secrets of the arts for personal and business success, by Dr Mark Powell and Jonathan Gifford

A full analysis of the dance aspect of the programme was published in the Journal of Organizational Aesthetics under the title, ‘Dancing Lessons for Leaders: Experiencing the Artistic Mindset’

This article first appeared on CultureUniversity.com under the title ‘Developing a Jazz Culture’.